It’s Football season in America. It’s Sunday. How do you do game day as a freelancer? Here’s what it looks like today…

I’m woken very early by the cries of “mommy”. So I take my baby downstairs and we cuddle (he’s 2 but he’s my baby). I Make coffee and sit back down with my son and see what’s happening with my side gigs on Facebook.

I started something new recently. It only cost me $18.99 to join and I make 25% commission, plus no fees to maintain! You can check it out here if you want!

I set the baby up with a movie, and yes, I’m one of those, please don’t criticize! Grab my coffee and retreat to office for a little bit to see what I can work on. Fyi, my office is basically in the living room – I can hear the movie and everything going on out there, so I’m not completely abandoning my children when I’m working – I’m doing what we need to do so that the kids aren’t in day care, yet I’m still adding income to our household.

This is the course I took that got me started as a virtual assistant. I’m still involved with Horkey Handbook and I get several leads a month from Gina and Daryn. I’m actually patiently waiting to hear back from a lead I just pitched on Friday. Fingers crossed!

My daughter wakes up, has her morning Cheerios, and we all get dressed and go outside to play in the backyard. It’s a beautiful sunny September day, 60 degrees with a cool breeze. My husband cuts the grass while I watch the kids and take pictures, of course! You know I also managed to post in a couple parties I have going on. Gotta sneak that in whenever you can! 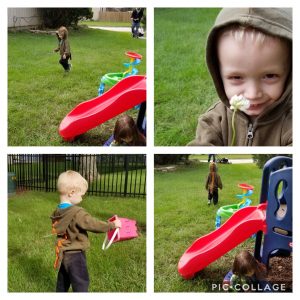 We come inside when Ana says she’s ready to come in. If I can stick it out until she’s done, I feel like it’s a huge win!

Get the Chili Started

Next I get a pot of chili going. I fill it with all of the things I would never eat alone or raw – spinach (finely chopped), onions, green peppers, petite diced tomatoes, and chili beans. I’m looking at this chili and think, I might not eat that. I say aloud, “it needs more meat”. My husband yells from the other room, “cook more meat”. So I ground another pound of very lean ground beef and add it to the pot to simmer. 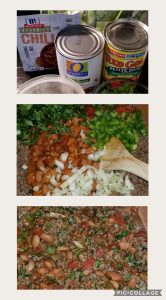 I retreat back to my office and work for about 30 minutes and realize I haven’t eaten any chili yet! After eating, and all that fresh air, I am sooooo tired. I walked towards my office at least a couple times and decided I couldn’t possibly do great work right now, so I laid down for a much needed 2 hour nap!

Ahhh refreshed! And I’m back at the computer to get some work done. But it’s Sunday and every device in the house is running, so I can barely get an email to send. We’ll say that’s why I’m not getting much work done today! So I clock out to start this post.

We’re near Chicago, and yes, we are Bears fans. The game tonight is against our big rivals, the Green Bay Packers. It’s 5:00 PM here, still sunny. Everyone is happy and safe inside our home. I feel really blessed today to be where we’re at in life.

Thank you Lord for everything you provide. Thank you Gina Horkey for your 30 Days or Less to VA Success course. Thanks for the house, Dad.

Are morning routines a thing? I mean, sure they are! But I need help! LOL

What is wrong with me?? Is it normal to be sooooo completely frustrated by this? My guess is that it is normal, but I would love to hear how you all cope.

We stopped watching him on TV because I didn’t like they way he is taught to cope with things (stomp 3 times, to make yourself feel better) it would be fine if she felt better after 3 stomps, but I don’t see it!

So she found DT on her tablet and has been watching things about potty training which she recently did, and now about her off to school and bedtime routines. I thought, she’s singing along, maybe it’s ok now. But all morning long it’s the song about getting ready for school. And she HAS to do it in order. This frustrates the crap out of me!

What Not to do

On the less than 5 minute ride to school, while I looked at my watch and thought about what time I started trying to wake her, that’s when it really hit me about how much time I just spent trying to get her ready to go to school, where she’ll be for only 2 hours! Ahhhh!!

So what did I do? I spoke sternly to her. I’m so ashamed. I didn’t yell, thankful for that. But I told her, “when I say it’s time to get up, you get up. When I say get dressed, get dressed. When I say brush your teeth, brush your teeth. When I say eat breakfast, eat breakfast. And when I say put your shoes on, you put your shoes on!” Does that kind of talking to a 4-year-old do anything? Most likely not. Except it probably further instills how much more she likes daddy.

Uggggg, Lord, please help me speak to my daughter in a way that will be receptive and understood and make her feel loved!

So when we got to school, I stopped her just outside. I squatted to her level and told her that even though it took her so long to get ready, I still love her more than anything. She lowered her head and said, “ok mommy”, but it sounded as though she had been rejected. This just breaks my heart. I gave her a big hug, and that was it, she was excited to go inside.

What Not to Say

I read so many different things about what to say and what not to say to gain trust and make well-adjusted little people. It’s so hard! Here’s what really sticks in my head:

She’s at the age where everything is a battle of wills! Everything is a big deal. Lots of whining, and lots of crying. It’s really been a huge test for me. I think the biggest thing I need to work on is being more flexible.

I have to remember that I’m working from home so that I can be the one here while she gets ready in the morning, and I’m the one taking her to school and after school activities.

And see, just saying that brings things back into perspective. I guess I need to get up an hour earlier to get more work in before she needs to get up. We can do this!

What do you do?

I would love to hear what you’ve implemented to make your morning routine run smoothly! How do you keep yourself in check when your kiddos test your patience? Comment after the post or send me an email!

PLEASE NOTE: the information on my site is not intended to be a medical diagnosis. I am sharing my experiences, as well as those of others who I either know, or have read about. Please consult with your doctor if you have questions or concerns!

We are a participant in the Amazon Services LLC Associates Program, an affiliate advertising program designed to provide a means for us to earn fees by inking to Amazon.com and affiliated sites.

I promise to only link to products that I use, have used, or would gladly use and thereby endorse!

I am an affiliate for Ava, Horkey Handbook, LaLaLeggings, Elk River Soap Company, and Siteground.